We got up, he had a shower, we all got dressed and had  breakfast.  They had rice congee – he was very pleased.  I haven’t found anything yet he doesn’t like.  He had two bowls of rice congee, a boiled egg, a spring roll, and a plate of fruit for breakfast. 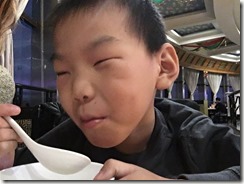 We headed over to the market for gloves and a hat for Kai.  The ladies at the market are so sweet to us.  Google Translator and pantomime are working really well.  People stare at us everywhere!  Before Kai was with us, I expected it – I remember they did that when we were young and living in SE Asia.  I just smile and keep going.  Now that we have Kai – my mood has changed.  They are so obviously looking and openly gawking at his face.  I understand they are curious, but the Mama Bear in me wants to protect my son.  We walk confidently and praise him.  He gets lots of love, hair strokes, and kisses.

Yesterday someone was talking to us that had lived in the US.  She told Kai he was very lucky and had good parents.  He answered, “I know.”  My heart was a little sad at that. A regular 8 year old doesn’t think he is lucky to have parents – they are his parents.  I know nothing about Kai, really.  What has he been told?  What is in his head?  Does he know we think we are lucky to have HIM?

At 9AM we meet our guide and headed back to the Civil Affairs Office.  In less than an hour, we had met with the Registration lady, the notary, and the orphanage lady.  We had our interviews, signed everything, and paid our fees.  And with that, William James Zheng Kai Turpin was our son.  (Seriously, so much easier than going to court in the US!) 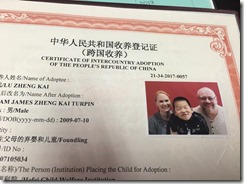 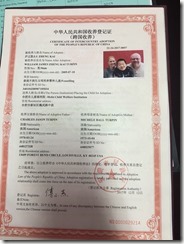 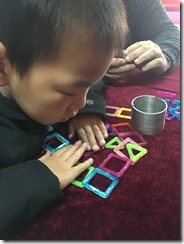 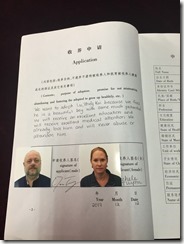 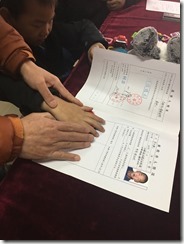 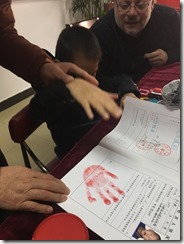 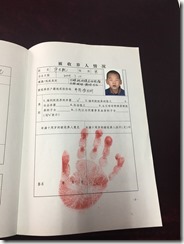 We have had a great time here and have loved trying everything – but I really wanted some good old fashioned American food for dinner.  There is a Pizza Hut on the Walking Street, so we headed out there.  Jason wanted Kai to have some more masculine shoes than the ones the orphanage sent, so we got him some cool black shoes. 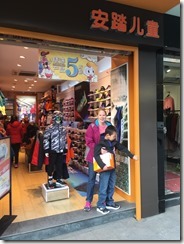 We walked around looking for some new toys and somethings to bring home to the kids.  Hope the kids like them!  :)

Dinner – Pizza Hut is a sit down restaurant.  The menu is totally different!  Exotic food, even steak.  Through Google Translator we asked for just a cheese pizza.  And they made us one.  Pizza has never tasted so good!!  I am mindful that sweet Kai will be missing everything normal to him/is missing everything normal to him.  Sweet boy.  I pray for him and his adjustment to his new life.

They brought us hot water when we came in.  He loves it!  Me, I’m a crazy American who has learned to bring a water bottle everywhere I go (even breakfast at the buffet!) 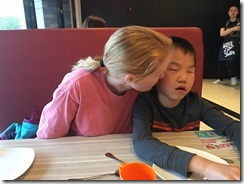 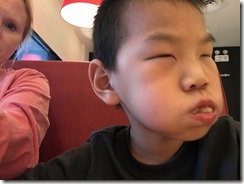 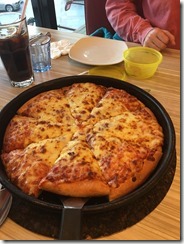 I have been praying to be a good mother to Kai – to be able to know what he needed, for everything we have learned from the other seven to help us with Kai.  So tonight when Kai was brushing his teeth, I saw the slightest little bum shift and put him on the toilet.  The sweet guy had diarrhea and has had it all evening long.  We have now had probiotics and anti-diarrhea meds and his tummy is slowing down.  But nothing – no signs of discomfort, no grimaces, nothing.  I have to watch him really close and I need to be careful what he eats.

He likes sitting on the floor playing with his little toys and listening to Chinese cartoons or music.  :)  He has been an absolute angel.  We love you Zheng Kai!!

He will eat anything you put in front of him. We were warned not to give him to much. He thinks you expect him to eat it. Hope everything is still going well.