3:15 Am comes so early!  Up and dressed.  Goodbyes said to our sweet bigs, who now have added stress and responsibility, silent caresses for the littles (I love you so much, please don’t wake up!), and we were off!  Gary dropped us off at the airport.  We made it through check in (breathing a bit easier), then TSA (another stress level peals back), and finally to the terminal and sit and wait.  Uncertainty, stress, and a feeling of being totally out of control means Jason had us to the airport very early  - but better safe than sorry! 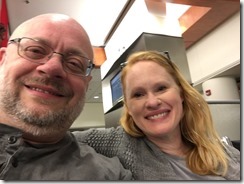 Our flight was a totally normal domestic flight.  We made it to Dallas and had about 2 hours to kill.  We arrived in B terminal, but it just a quick walk over to D terminal.  D terminal in Dallas is like a mall!  They have clothing stores, a million different places to eat, traveler’s stores, even a 7-11!  Has it been so long since I traveled internationally?  What happened to the boring terminals?  We got ourselves Einstein Bagels – super yummy.  (It reminded me of when Becca was our only child.  Jason and I both worked, so Saturday was “Becca day.”  We would start the day with a bagel at Einstein’s Bagels.  They are just as tasty as memory serves!)

Then we sat and waited for our flight to Shanghai.  With few exception, everyone around us looked Chinese – “we are going to China!! is definitely hitting!”  I passed the time watching a three year old play with his Mama.  He was adorable and super energetic.  I used Google Translate to ask his age (wondering how important this tool is going to become to me over the next two weeks.)

(pic of Jason and I at DFW, waiting to board – “We are REALLY going to China!” 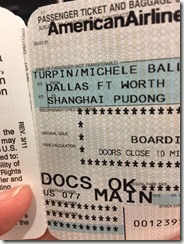 We were so excited to board, so excited to finally be doing this – all worries about visas and passports and someone finding some reason we can’t go, are through.  We sat next to a delightful 29 year old Chinese student.  She is currently working on her Master’s at Baylor, and she spoke beautiful English!  :)  She was kind enough to go through my list of phrases and help me practice.  My Mandarin skills….they leave a lot to be desired.

The flight – We were encouraged by the head room and the seats seemed a bit bigger than our domestic flight for this 15 hour flight.  Reality – we are packed into straight chairs for 15 hours!!!  LONGEST FLIGHT EVER!  I NEVER want to be on an airplane that long again – until the 22nd to take me HOME!  Goodness – while domestic flights are pretzels and a beverage, international flights are food, food, and more food.  Pretzels, a meal, snacks, a packaged snack, and another meal.  And if you wanted more snacks, they were there for the taking.

The inflight entertainment screens built into the seatbacks were great, but mine didn’t work.  They gave me a tablet, but that wasn’t working either.  So we just watched movie after movie on Jason’s screen, sharing a pair of headphones (The family that shares ear buds stays together??).  I read and read. We watched movies.  We tracked our flight (seriously cool feature!!) We ate.  Surely this is almost over, but alas, only 4 hours had passed.  10 plus to go.  Oh my goodness, oh my goodness, oh my goodness!  We tried to sleep.  We took sleeping aids – that works for brief stretches – Jason doesn’t have his mask, and I have no where to lay my head  (Luke 9:58: “foxes have holes and birds have nests, but the Son of Man has nowhere to lay his head.”  Crazy the things that pop into your head when you are tired :)   )

The sun was always on our left – the phone has technology to darken the windows.  We flew across Canada, Russia, flew around North Korea, and then we flew through China.  7704 miles – that’s a long trip! 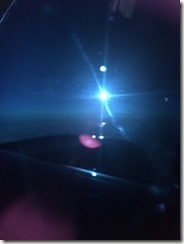 Summed up – the airline was great, the people so friendly, the food,  and quantity thereof was great, but I was SO excited to get off that airplane!! 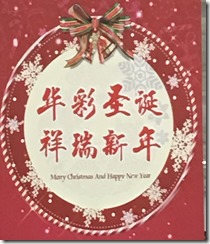 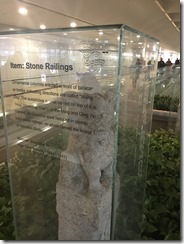 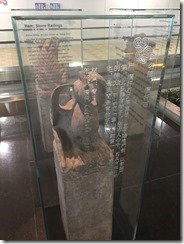 We thought this was a cool plane – Dragon Air.  There is a dragon on the tail.

Next up, Foreigners got to go through immigration – no big deal really, just a long wait.

Seriously, though, walking through the airport and driving through the city, it looks the same as in American, except people are speaking a different language.  I marvel at the people and the “wondrous variety” of people where waiting in the immigration lines.  So many different countries, continents, and languages were represented!  I marveled that Heavenly Father knows all of us – speaks all of the languages I was hearing – knows the thoughts and needs of each individual.  So amazing!

Then we grabbed our bags (yeah we still have three – AA scans your luggage at each point in their journey, so Jason knew where our bags where at all times – a stress reliever, don’t want to be in China and not have any clothes!)

Then customs and our first taste of Chinese traffic jams.  Everyone has to funnel through customs, so it’s kinda like pouring sand into a funnel, all of the humans just mesh together and come out the other end in a nice straight line – and as I was almost to see, also like their roadways :)

We were meet by our guide, Ashley – so grateful we were meet by our guide Ashley!  Having that Mandarin speaking barrier between us and reality was wonderful!!  Ashely is great!  This is her part time job for the weekends.  She has a full time job in business and trade, and just does this on the side.  So relieving to have someone with you that speaks the language!

She called our driver – another yeah to not have to worry about transportation – and we were off.  Shanghai is the biggest city in the world with 25 million people.  That’s a lot of people!  It’s enormous!  Everywhere we looked, buildings, buildings, buildings, and even more being built!  Huge housing buildings were clustered together.  It blows the mind to realize how many people live here.  We didn’t see the whole thing – just from the airport to our hotel downtown.  It took 45 minutes to get there, seeing building after building after building, with no end in sight.  I thought about how missionaries aren’t allowed into China, and if they were, I wondered how many missions would have a city like Shanghai have?  I looked at those enormous housing buildings, and imagined missionaries tracking there, “just one more door.” (Elder Utchdorf reference)  This city is, well find a word that means super, super big and enormous.  It’s that!

Traffic is interesting – she said it was worst because it was the weekend – which I thought would have made it better.  No, in Shanghai only cars registered to this area are allowed on the roads M-F.  On the weekends, people can drive in to visit the city or friends.  It’s to help with the traffic. 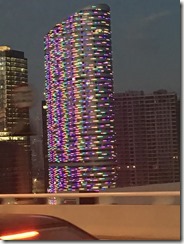 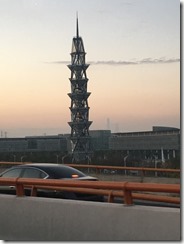 There is a HUGE river that runs right through Shanghai. 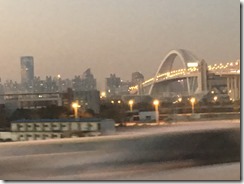 After we dropped off our bags at our hotel (very nice 42 stories!!!), Ashely, Jason, and I walked down the street to a local restaurant.  Our caseworker with Heartsent had told us that Shanghai’s specialty was dumplings  with soup in the middle.  So we had to try them!  Yum!!  Our guide called them fried dumplings.  We had duck, fish, spring rolls, fried dumplings, and wonton soup.  It was so yummy!!  So grateful we had Ashley with us.  The Chinese speak loudly and quickly, and I know no Mandarin.  They are in a hurry and expect you to know what you are doing.  So we let Ashley handle everything.  :)  There is also no personal space and people just move and expect you to let them (like how they drive). 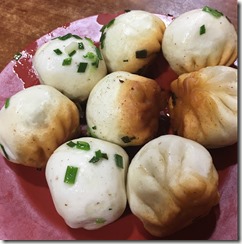 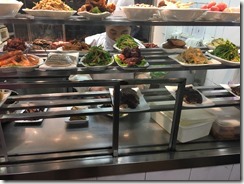 The food was great!  The weather was good, and we enjoyed the walk on the street.  We stopped at a “family mart” on the street to pick up an item that didn’t make it into our suitcases.  There were so many little shops, selling everything from food and groceries to fancy clothing and electronics.  The shops were so little.  People were everywhere!  Ashley walked with us back to our hotel and told us about some other places we could go that were nearby, but we just wanted to sleep.  Our day started at 3 AM on Dec 8th, and ended at 8:30PM on Dec 9th.  So I’m not sure if this counts as one day or two :)

And then, of course, jet lag, so I’m writing this at midnight.  Hoping to grab a couple more hours of sleep before we are off to Hefei!