How is Kai doing?

So how is he doing?  Well, we had kinda found a routine in China.  His favorite times were when we would go upstairs to eat – “Eat!”  We had a song we sang each time.  We were doing OK.  Then we came home and of course everything changed – again – for poor Kai.

Now Kai has many sisters and one brother.  He has figured out that we take a bath every day – and he LOVES the water!  He loves to splash and pour water in and out of cups.  He just grins and giggles.  It’s adorable!! 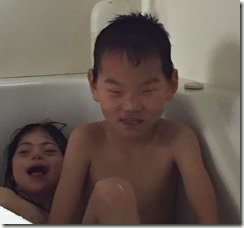 When we put him to bed, Baba tickles him.  He loves that!  He giggles and laughs! 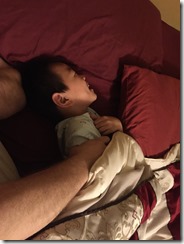 We are listening to A LOT of Chinese cartoons!  He loves to hear Mandarin!  When a person speaks to him in Mandarin, he will get very quiet.  When it’s his show, he laughs and repeats phrases – sometimes quite loudly! 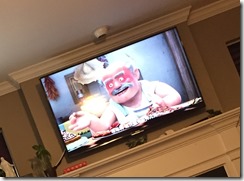 During the day, when we are just being, he sits on the couch.  I guess he feels safe there.  I keep a bucket of toys within arm’s reach.  One of the items in the bucket is a book.  I can now tell you that he does know how to turn pages, but finding the braille on the pages seemed to be a first! 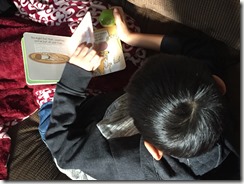 One area we are really struggling in is eating.  He was a great eater in China – little Chipmunk, I called him. But since coming to the States, he isn’t eating well.  He’ll eat apples and bananas, sometimes rice.  He’ll eat junk food from China that we brought back, not much else.  So I broke down and bought him some PediaSure.  That he will drink!  Goodness!  We keep trying new things.  Becca went to the Asian market and bought him some bao (steamed buns).  He immediately identified it – bao, but he wouldn’t eat it.  :(  At least I know the PediaSure will keep him alive till we overcome this hurdle. 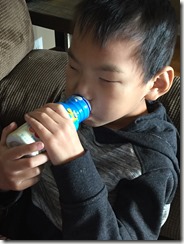 Someone online suggested we take him out to a Chinese restaurant – as authentic as possible.  A friend recommended a place in town.  We piled into the van : Daddy, Mama, Becca, Ellie, Sammi, Jessi, Lizzy, Joy, Bella, Alex, and Kai and Kai completely lost it.  Kai cries and it’s heartbreaking.  Now, I’m a mom of six daughters.  You would think I would be used to tears, but you see I’m not a crier.  It’s just not our way.  But looking at these silent tears rolling down this sad, sad face, is heartbreaking.  So we sent Dad and the Bigs out to dinner.  The Littles had McDonald’s (they were happy!) and Dad brought us home some food.  Sounds like they found a great place!  The owner is from Anhui province (Kai’s province), the server is from Guangzhou.  They were invited to come back for Chinese New Year (and if they could help in any way – so kind).  But yet again, Kai wouldn’t eat.  So yeah for PediaSure and yeah for kind people!

Everyone says the best way for these sweet kiddos to learn English is just to pick it up – immersion.  After all of these frustrations lately, I decided to scrape it all.  No, I didn’t suddenly receive the gift of tongues (wouldn’t that be awesome!!!), instead I found the app “Sayhi.”  I like it better than Google Translator because as you speak in English, it writes what it heard in English and then says it in Mandarin.  This is amazing because sometimes you say one thing and the device interrupts it as quite another!  So I can quickly fix that!  :)

So Thursday I started using the translator app all the time.  I told him everything we were doing.  I told him what we were eating.  I told him where we were going.  And it worked!  We haven’t been able to leave the house – but Thursday we did!  We took Brother to school.  We took Sister to school.  We picked Sister up from school.  We bought Sister some shoes.  And he was happy!  Well, of course, Shelly, he knew what was going on.  But we are supposed to be English immersioning (verbing a noun)!!  But he is Blind – completely and absolutely.  How terrifying must life be for him right now?  Now if I have delayed his English acquisition, so be it.  He knows what is happening around and to him.  He is happy – so I am happy!

BTW – he loves to push carts! 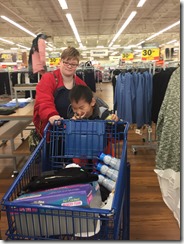 So today the girls had three hours of therapy.  Then we had to take them to school.  Then run over to Kentucky School for the Blind to drop off some papers for him.  I translated everything – and it helped SO MUCH!  He did not like walking through the grass (uneven) at the school and he didn’t like the chime at the school when the door opens, but overall he was an angel.  And luckily, who should be in the lobby when I stopped in, but Alex’s teachers – who will become Kai’s teachers!  So I got to introduce them to him and to talk to them all about my Kai.  I’m so grateful he will get to go to school there and have these women as his teachers!

Exploring the gym at therapy while sister had PT.  He LOVED it! 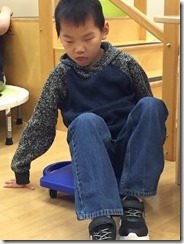 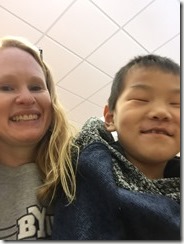 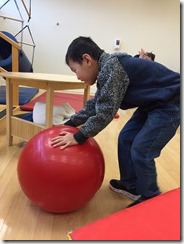 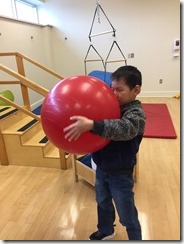 So how is Kai doing?  Well, I’d say for being here in the States for 13 days – pretty well!  We have got to solve the eating situation, but I think we’ll get there.

Kai is a brave, brave little boy – and so sweet and happy.  Love ya Kai!  Grateful I get to be your Mama and watch you tackle this world!

It makes sense to give him guidance. If he was sighted, it would make a difference but because he is not and doesn't understand English you will have to go the longer route. What do you think about bringing a Mandarin speaker over to the house and walk Kai through. Count steps up, explain back yard, etc. It would probably take several times but he will at least get the idea of where he is going. I have seen shows where the blind need everything in the same place so that they can maneuver around by himself. It would be scary to not know where anything was.