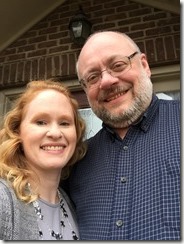 Jason and I didn’t get to do anything special for our silver anniversary – except go to the American Consulate in Guangzhou, but that just really wasn’t what we had in mind.

So today was the day!  The kids babysat and we went out.  It was all a surprise for my Jas – I planned it all.   I had been trying to come up with something special, but we couldn’t go anywhere overnight cause we are too new to Kai.  So when a member of my church was selling Broadway musical tickets, I jumped on them.  Perfect, I thought!  Combine that with one of his favorite restaurants and we should be great!

Well, I guess cause they were being sold by a member at church, I didn’t look into the show – like at all.  But in retrospect, that wasn’t a smart idea!  We were pretty much shocked for the first scene.  Yes, we did end up leaving.  We were pretty amazed, and not in a good way.  (Seriously, how can people yell about sexual harassment and the treatment of women and then go and clap and cheer for that kind of movie?)

We went on to the restaurant, a Brazilian Steakhouse – the kind where you can eat all of the steak you want.  It’s really yummy – and Jason loves it!  But before we got started, Jason and I bowed our heads to pray.  While holding hands, Jason talked to Heavenly Father about the show we had just seen, our shock, and then asked a blessing on the food we were about to eat.  I seriously could not love him more at that second – I know I’m weird and religion is extremely important to me, but Jason is really a quiet guy.  He isn’t one to go on and on about church stuff, that’s more me.  To sit across from this man, who had just walked out of a crazy show, and was now talking to his Father and God about it, I just felt so much love for him at that second!

And yes, the food was great – but we didn’t overeat.  Yeah us!

We decided to take in a movie.  We tried for Greatest Showman, but there were only two tickets left – on opposite sides of the theater, not exactly the way anniversary celebrators should sit.  So instead we saw Jumanji – which was so much better than the other show 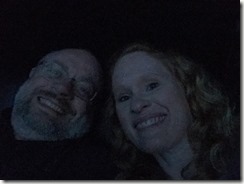 I’m really grateful for Jason.  For 25 years we have walked together through life.  Life is crazy and messy.  I’m grateful for you, Jas!