I’ve been dreading this day – the day I take Kai to the opthalmology oncologist.  I even asked for prayers on Facebook.  Kai and I drove up to Cincinnati to a highly recommended specialist up there.  He reviewed everything I brought from China (in English – yea!) and then came in and talked to me.  He briefly examined Kai, but Kai didn’t really want him to, so he didn’t push it.

Kai has/had bilateral retinoblastoma.  He has received chemo twice.  He has the hereditary kind.  A hundred years ago, no one survived bilateral retinoblastoma.  He isn’t worried about any more tumors in the eye region.  He told me that the average person has a 24% chance of dying of cancer.  Kai has 50%.  He didn’t have radiation – that is a good thing.  The cancer we should worry about now would be aggressive tumors in the long bones.  We would notice those if he started limping.  But at this point, he feels Kai could easily be followed by a once a year check at a cancer survivors clinic or even a very thorough pediatrician.  Yea!  Good news!  We are going to move forward and not worry about cancer.  Yea!

The trip was long and confusing for Kai.  He doesn’t like walking aimlessly nor does he like walking through the cold – both of which he had to do in Cincinnati.  So we had a couple of meltdowns, but we got good news from the doctor!!

We talked about prosthetic eyes.  He felt that Kai should be able to get them when he is ready and when he wants them.  He even said that since his eyelids are closed, if he doesn’t want them, he looks good.  Socially, it might be easier for him with eyes, but only when he’s ready. 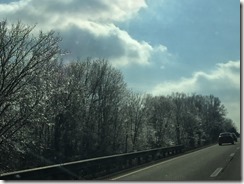 (read to the tune of a Llama Llama book:)

(Can we say he’s 8.  He’s a boy.  He doesn’t understand the language. Everything is weird to him and he has no idea where I am taking him.)  But I want him safe – so yes, I was the model patient mother, but please no more temper tantrums in the middle of the street or in the parking garage (Yes, valet parking would have been brilliant. Except I had $3 and it cost $5.  So I’ll be more prepared next time!) 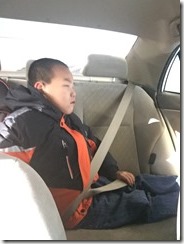 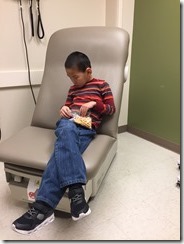 The Barrett Cancer Center is covered with great sayings:

Cincinnati – it always gives me a thrill to come around the hill and see that skyline!  (city girl)