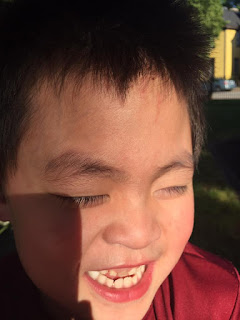 This sweet guy.  Alex doesn't have summer school on Fridays.  We dropped off Kai at his STEAM camp at KSB but had to be back at 10:30 for their program.  I didn't want to go home to turn around and come back, so we stayed in town.  Louisville is full of little pocket parks.  So Alex and I explored four different ones.  We were all over Germantown, Highlands, Old Louisville.  He had a blast!
It was interesting to me to watch and feel each different little community. We stopped to grab a treat at the bakery across from KSB.

As we waited for the program to start, Alex was getting really agitated and restless and NOISY!  I was afraid, not scared, but afraid his behavior which was so opposite from the morning was trying to tell me something.  I was trying to keep him quiet (not working) but also listen to the program and Kai's part (precious).  Miss Patti, one of his aides from last year, offered to take him outside so I could listen (Thank you! Yes!!)  He came back in after a while, and sat in a chair beside me.  The program was over and we were talking and I looked down (just felt weird) and he was having a seizure - drool, stiff but with a slight tremor, and totally gone.  It lasted about a minute and then he curled up in my lap and went to sleep.  I'd say about an hour later, he had recovered.  He wasn't totally up to running and jumping, but he was moving and making sounds again, so we left.

About an hour or two later, he came into the room and curled into my lap and went to sleep.  There is a certain position he wants - because he's weak and can't hold himself up.  An hour later, I was tired, so I laid him down on the couch.  He didn't wake up.  Occasionally he would move, but he would make these smacking noises with his lips, teeth, and tongue (hard to explain) and then go back to sleep.  So then I started worrying.  Was he seizing?  Was he in status again?  Another hour passed and finally he woke up.